But probably the single most important artistic influence on Picasso (and, for that matter, on both Matisse and Braque, the two contemporaries who meant the most to him) was the work of Cezanne, their direct predecessor. Cezanne was neither a great draftsman nor a masterful colorist, but he had seen deeply into the nature of painting, at least as the twentieth century was to conceive it. Cezanne came to see painting as a formal undertaking: formal in that issues of form were determinant and in that the geometric forms implicit in all perceptible matter served as the bedrock for graphic activity. “You must see in nature the cylinder, the sphere, the cone,” he declared. Particularly in his later years, Cezanne abandoned perspectival rendering and instead fused the planes of the foreground and background into an ensemble of overlapping forms and colors.

And in his search for a permanent pictorial reality, he turned his back equally on the complex of color, emotion, and sensation that had been prized, in their respective ways, by the impressionists and expressionists. A major retrospective on Cezanne held in 1907, the year after his death, profoundly affected his younger contemporaries: “Do I know Cezanne? He’s my one and only master,” Picasso told Brassai several decades later.

Like any epochal work, Les demoiselles can be described in numerous ways and from varied perspectives. Perhaps most simply it is a large (approximately eight feet by eight feet) and devastating portrait of five prostitutes, arranged in an arresting composition, each assuming a somewhat different position across the canvas, each appearing totally isolated from the others. Their faces are blank and vacant; their eyes, wide and black, stare directly out, independent of the orientation of the face; their bodies, virtually flat and without form, are only partially sketched in. There seems to be a struggle between the soft human flesh of the women and the harsh forms and angles with which they are depicted. 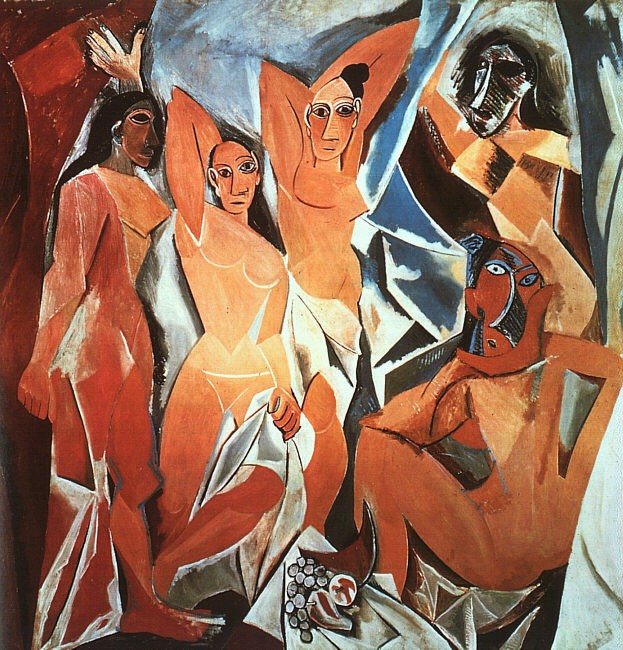 The precise thematic message of the painting remains obscure, but clearly the portrait, allegorical in tone, is meant to be a savage characterization of the way of life of these women. (An earlier title was The Wages of Sin.) The aesthetic message is equally clear: Picasso has declared war on the notion of painting as realistic or uplifting and has insisted on the priority of the formal features urged by Cezanne. But whereas Cezanne’s themes were either neutral (still life) or benign (bathers, card players), Picasso’s motifs were as searing as those treated earlier, in La vie, or later, in Guernica. 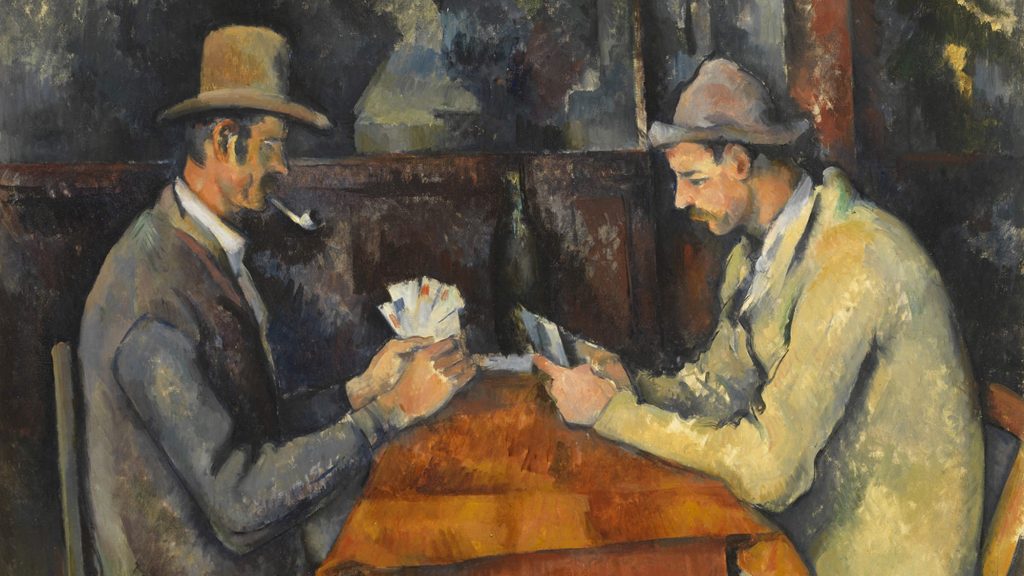 Initially, Picasso had included a sailor at the center (possibly one being initiated into sex) and a medical student at the left of the painting; at certain times the student was holding a skull, at other times a book. These figures were presumably designed to illustrate the range of male clients and the variety of attitudes toward a life of prostitution—or perhaps to capture different aspects of Picasso’s own physical and psychological being. The features of the brothel were more clearly delineated as well (including a curtain drawn to allow an inward look), and for a while, there was a homunculus or embryonic creature in the sketches. The ultimate deletion of various moralistic “commenting figures” allowed Picasso to portray the life of prostitution more starkly. The depiction and even the number of female figures also changed over time; it appears that the two figures on the right were added later to the canvas and that their faces, originally Iberian in appearance, had been changed so that they look like African masks. One enduring feature is the raised “announcing” arm on the left figure: intriguingly, a similar outstretched arm recurs in Guernica thirty years later.

Picasso’s ambivalence toward the work was heightened by the reaction of his acquaintances and friends. Even those who had admired his earlier work did not know what to make of Les demoiselles. Reactions ranged from confusion or mystification (Gertrude and Leo Stein, Braque) to downright rage (Matisse). Everyone found that picture crazy or monstrous.” Picasso described what it is like at such moments when one is taking enormous risks: “Painting is freedom. If you jump, you might fall on the wrong side of the rope. But if you are not willing to take the risk of breaking your neck, what good is it? You don’t jump at all. You have to wake people up. To revolutionize their way of identifying things. You’ve got to create images they won’t accept.” Stung, though not derailed by the mostly hostile reactions, Picasso quietly put away the canvas and did not display it publicly for several years.