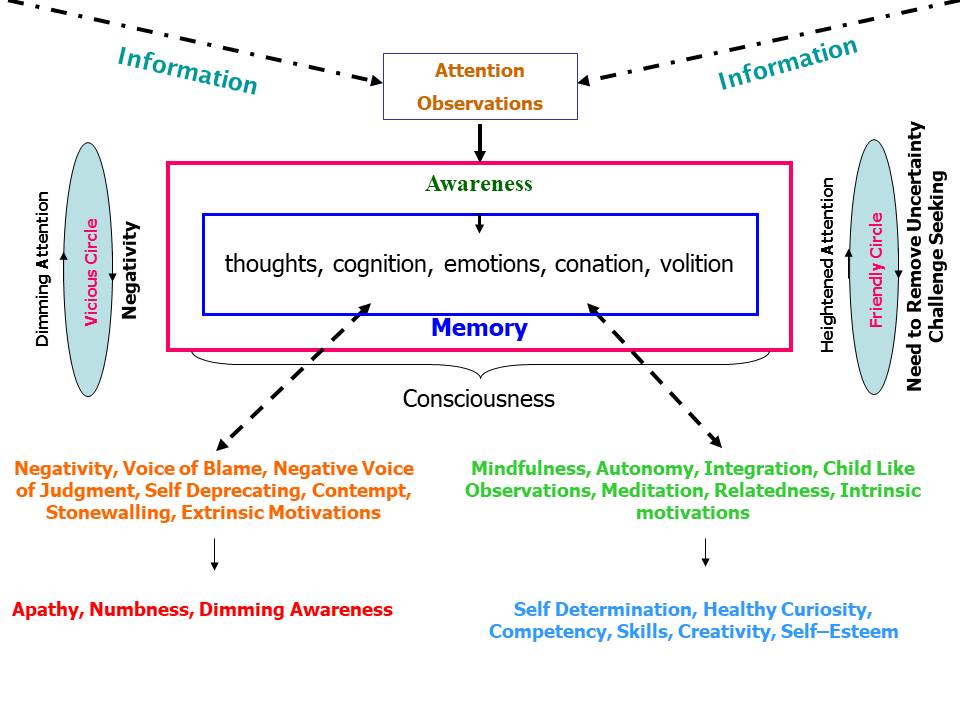 Notice in the illustration above we discuss Dimming attention as the result of negativity. Daniel Goleman in his excellent book called “Vital Lies, Simple Truths discusses an interesting observation. He says:

“At the neural level lies the cardinal model for the tradeoff between pain and awareness. The brain, as we shall see, has the ability to bear pain by masking its sting, but at the cost of diminishing awareness.”

My thesis, in sum, revolves around these premises:

• The mind can protect itself against anxiety by dimming awareness.

• This mechanism creates a blind spot: a zone of blocked attention and self-deception.

• Such blind spots occur at each major level of behavior from the psychological to the social.

Professor Mihaly Csikszentmihalyi has a similar view. He believes the consciousness experiences unpleasant disorders and random drift when not engaged in goal directed actions. He defines anxiety and boredom as a painful sensation experienced by a drifting consciousness that lacks motivation and concentration. His simple solution is to train the body through jogging, yoga, martial arts; developing hobbies like woodworking, painting, or playing a musical instrument.

Newly elected President Franklin D. Roosevelt came to call on Justice Oliver Wendell Holmes and asked the older man why he was learning Greek (at his age). “To improve my mind, young man,” said Justice Holmes.

The way all these activities work is through a rigorous demand for focus attention, heightened concentration, and preventing disorder in the consciousness.

Majority of the thoughts that come to our minds when not concentrating on an activity or working are depressing. There are more bad things in our lives than good ones. Negative possibilities always outnumber the positive ones. Professor Csikszentmihalyi believes, as part of evolution and adaptation, by dwelling on unpleasant possibilities, we might be better prepared for the unexpected. When the mind dwells on something negative, it creates conflict in consciousness. Depression, anger, fear, and jealousy are simple manifestations of such conflict. While negative feelings last, they take over our minds and sap the motivation.

We are all born motivated, is what we perceive to be true but isn’t and what we believe falsely that kills the motivation.

According to Jean-Paul Sartre most people live with “false consciousness,” pretending even to themselves that they are living in the best of all possible worlds. This seems like a vicious circle; skewed attention or skewed perception brings negativity which induces a chemical that has numbing effect which dimes the awareness or reduces the attention.

Contemporary society fosters our mental tendency to deny or suppress our awareness of reality. Ours is a society of denial that conditions us to protect ourselves from any direct difficulty and discomfort. We expend enormous energy denying our insecurity, fighting pain, death, and loss, and hiding from the basic truths of the natural world and of our own nature.

When you are having a bad time, examine that experience, observe it mindfully, study the phenomenon and learn its mechanics. The way out of a trap is to study the trap itself, learn how it is built. You do this by taking the thing apart piece by piece. The trap can’t trap you if it has been taken to pieces. The result is freedom.

The purpose of this book is to teach new observation and listening skills, spiritual meditation, praying, and other techniques to stop this vicious circle and to transform your mind from the left side of the illustration above (numbness and depression) to the right side of the illustration above. Of course the right side creates a friendly or virtuous circle. The better the observation or perception, the more heightened attention and need for removing uncertainty, challenge seeking and vice versa.

The reader should also know that the right side of illustration also function based on similar conditions. Intrinsically motivated behaviors are also aimed at establishing certain internal conditions that are rewarding. These conditions are related to the needs of the brain and may be sought in order to avoid or reduce threats to the functioning of the brain. These threats to functioning may be of creative needs. Indeed, when people are free from the intrusion of drives and emotions, they seek situations that interest them and require the use of their creativity and resourcefulness. They seek challenges that are suited to their competencies, that are neither too easy nor too difficult. When they find optimal challenges, people work to conquer them, and they do so persistently. In short, the needs for competence and self-determination keep people involved in ongoing cycles of seeking and conquering optimal challenges.